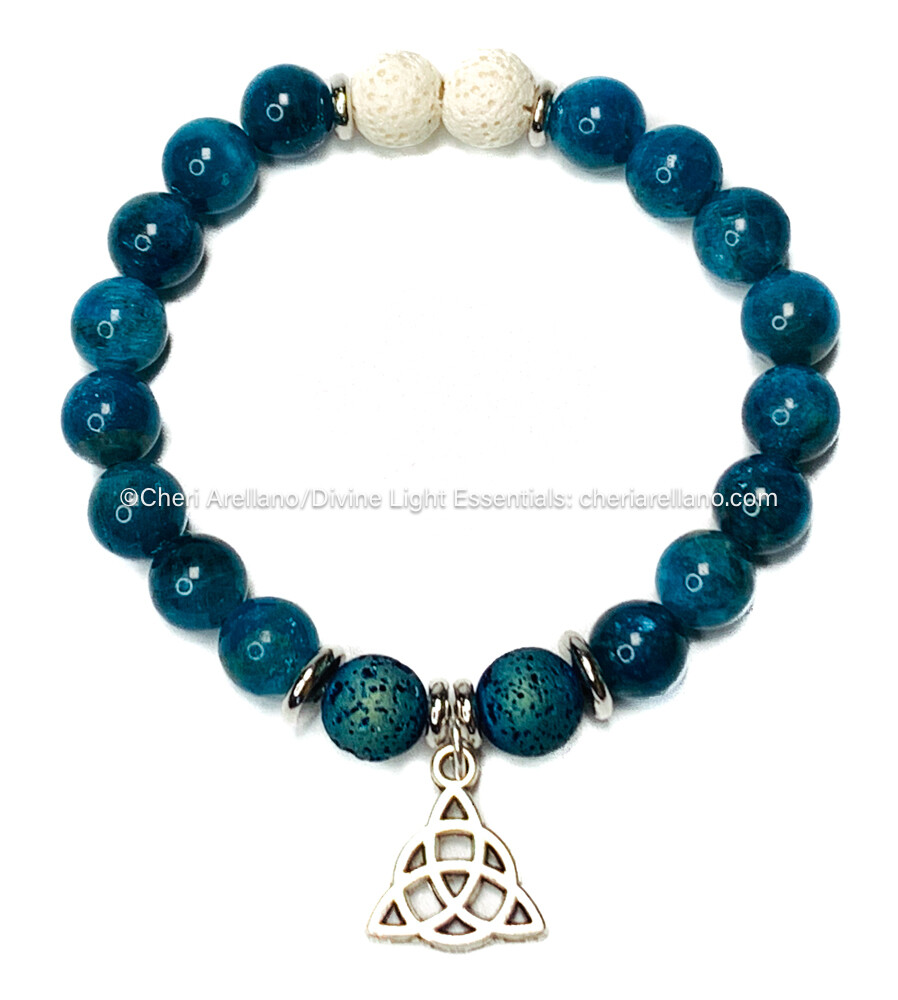 Apatite & lava beads with a silver triquetra pendant and silver accents. Apatite supports creativity, intuition and communication. These are high quality apatite beads, you will see and feel the quality difference!

Triquetra means “triangle” or “three” (tri-) “cornered” (Quetrus). It is made up of three intersecting vesica Pisces. The Vesica Pisces is the shape created by the intersection of two congruent circles.

An ancient Celtic symbol, the triquetra is considered one of the oldest; dating back to as early as 500 BC when it was used to symbolize the triple goddess (maiden-mother-crone). Over the centuries it has become the symbol for the Holy Trinity among Christians in Ireland. The symbol is often used to represent the 3 fundamental elements – air, water, and earth or the infinite cycle of life. It is also known as a rune of protection.

"In modern times, the triquetra symbol has become a symbol of anything three-fold e.g. the cycle of life (life-death-rebirth), the promise of a husband to his wife (love-honor-protect), the family (father-mother-child), the passage of time (past-present-future) and many more. The circle that is often interlaced with the triquetra represents the bond between the three elements.

The lava beads hold essential oils and retain the smell for about 2 days. Drop or roll your favorite oils onto the lava beads to continue your aromatherapy healing. These were designed to go with the chakra balancing elixir oils.

Save this product for later

Hi! Be among the first to know.

When you subscribe to my list you'll receive discount codes on products and services, my newsletter & event notifications.
p.s. I only send out newsletters occasionally.

You made the right choice, thanks for subscribing! Use your discount code wisely: SUBSCRIBE10